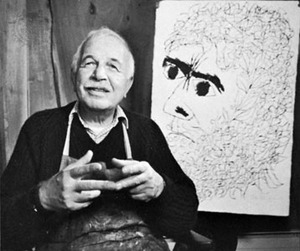 A painter, teacher, graphic artist, and photographer, Ben Shahn was devoted to the figurative tradition and was one of the more significant social critics among painters of the 20th century.

He was born in Kaunus, Lithuania on September 12, 1898, and emigrated with his family to the United States in 1906.  From the ages of 15 to 18, Shahn was apprenticed to a New York lithographer.  In 1919, he enrolled at New York University, completing his studies at the City College of New York in 1924.  After 2 years studying at the National Academy of Design, Shahn traveled in Europe and North Africa.  Returning to America, he had his first one-man show in 1929.