William Dodge MacKnight was born on October 1, 1860 in Providence, Rhode Island. After leaving school, he worked as an apprentice scene painter for a local theatre. At Christmas in 1883, at the age of 23, he sailed for France. In Paris he studied in the studio of Fernand Cormon (1845-1924), where he stayed until February 1886. Among his fellow students were Toulouse-Lautrec, Emile Bernard and Louis Anquetin, together with two artists whom he got to know particularly well, the Belgian Eugene Boch (1855-1941) and the Australian John Russell (1858-1931), who painted the only known portrait of MacKnight.  They played a key role in introducing MacKnight to the Parisian avant-garde.

He was once a friend of many of the impressionists and post-impressionists. MacKnight studied and worked in France from 1884 to 1897, and the untold story of his early years throws new light on his more famous contemporaries. At one point he was close to Van Gogh, who suggested that MacKnight should move into the Yellow House in Arles with him, before the arrival of Gauguin. MacKnight also knew Sisley, and a letter from him suggests that Sisley may have made a previously unrecorded visit to Cornwall.

MacKnight was highly regarded, and in 1921 he was described by a British critic and enthusiast for the post-impressionists, Lewis Hind, as one of the world's four greatest modern watercolourists.  But apart from a privately published (and now scarce) book on MacKnight written by Desmond FitzGerald in 1916, very little on him has appeared in print.  Since MacKnight's death there have been only two exhibitions of his work, at Boston's Museum of Fine Arts in 1950 and the Heritage Plantation in Sandwich, Massachusetts, in 1980.

MacKnight himself downplayed his links with the impressionists and post-impressionists, and there is not a single mention of them in FitzGerald's book. Most of the material on his early contacts with these artists comes therefore from contemporary correspondence. 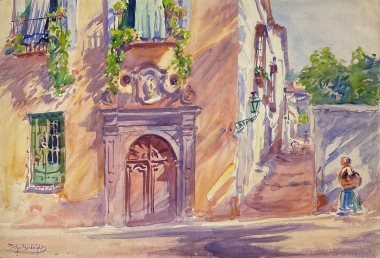