There is little known information regarding the 19th century artist John J. Eyers. He exhibited four still-life paintings at the Pennsylvania Academy of Fine Arts in 1868. At that time he listed his address as 108 South 4th Street, just down the street from Independence Hall in the historic district of Philadelphia. It was also not far from the Pennsylvania Academy of Fine Arts location of that time at Tenth and Chestnut Streets. This would have put him in the heart of Philadelphia’s cultural life.

His work bears a strong resemblance to that of the German born still-life artist Severin Roesen. This has led to some speculation that Eyers may have immigrated to the United States from Germany. 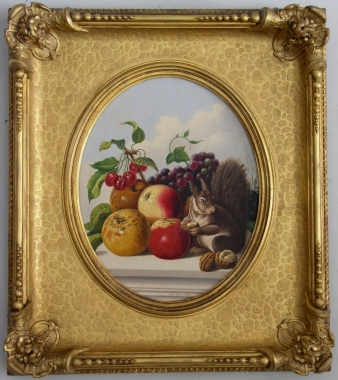 John J. Eyers
Still Life with Squirrel
Back To Top