Benjamin Hartley is best known for his missionary work in Western Africa with his wife, Emily Griswold. After surviving near-death during a railroad accident, Emily devoted herself to missionary work. In 1860, at the age of twenty-two, she traveled to Liberia as part of an Episcopal mission. In 1864, Scottish-born artist Benjamin Hartley also arrived in Africa. Hartley received his formal art training at Royal Scottish Art School of Edinburgh. Upon arrival in the United States he decided to enter the ministry, attending the Theological Seminary in Gambier, Ohio, formerly associated with Kenyon College. Hartley was ordained in Brooklyn, New York, in May of 1864, and by July was in Cape Palmas, Liberia. The two missionaries met that year, both aged twenty-seven, and married in Cape Palmas.
During his travels in Africa Benjamin carried with him empty sketch books, inks, watercolors, and, most surprisingly perhaps, a camera. He documented the world around him, so different from Scotland and Ohio. He drew and painted the people, their homes, the harbor, and the plants, animals, and architecture of Cape Palmas, the Hoffman river basin, and nearby communities of the Grebo (Kru) people. Dozens of his drawings and watercolors are preserved in the family collection. Images of the American missionary towns of West Africa from this period are extremely rare, and the collection has become a valuable visual resource for scholars.
The couple left Africa in 1867 and lived in New York, Kansas, and Missouri. He is known to have lived and preached in Brighton, Massachusetts; Holliston, Massachusetts; Blossburg, Pennsylvania, and Bridgeton, New Jersey, where he remained until 1879. From New Jersey he moved to Fort Scott, Kansas. By 1909 they were residents of Los Angeles, California. Hartley exhibited his scenes of Africa and Ohio at the Los Angeles Painters Club in 1909. 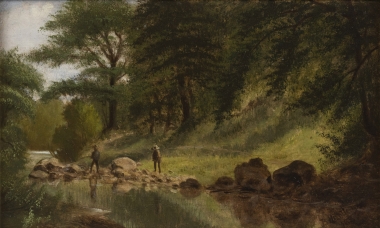 Benjamin Hartley
On the Marmaton River, Kansas
Back To Top